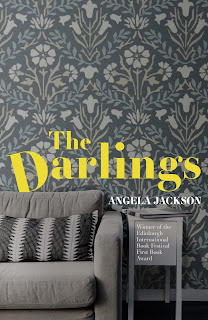 When Mark Darling is fifteen years old, he is the golden boy, captain of the school football team, admired by all who know him. Until he kills his best friend in a freak accident.

He spends the next decade drifting between the therapy couch and dead-end pursuits. Then along comes Sadie. A mender by nature, she tries her best to fix him, and has enough energy to carry them both through the next few years.

One evening, Mark bumps into an old schoolfriend, Ruby. She saw the accident first hand. He is pulled towards her by a force stronger than logic: the universal need to reconcile one’s childhood wounds. This is his chance to, once again, feel the enveloping warmth of unconditional love. But can he leave behind the woman who rescued him from the pit of despair, the wife he loves? His unborn child?

This is a story about how childhood experience can profoundly impact how we behave as adults. It’s a story about betrayal, infidelity and how we often blinker ourselves to see a version of the truth that is more palatable to us.

The Darlings by Angela Jackson took me on a very interesting journey while reading. I was drawn to the complexity of Mark's character. I felt that the accidental killing that he experienced in his young life really impacted every aspect of his life into adulthood in every possible way.

Mark, being haunted by this event creates a somewhat content life with his wife Sadie who after years of trying is finally pregnant, however there is a void in Mark's heart that remains unfulfilled. I love how from the very beginning he asks himself whether he will be a good father or not. That part really stayed with me.

But Ruby's entrance in the story changed everything. Oh yes, this blast from the past Ruby, was a witness to that freak life altering accident. This chance encounter really impacted Mark's life in more ways than you can imagine.....

The writing in this novel was superb to say the least. It is my first time reading Angela Jackson and it would not be my last.  I truly enjoyed this novel mainly because it was so well written. The story line was good and the cast of characters really drew you in.

When reading The Darlings you will feel every emotion sadness, regret and even joy and a bit of humor.

A very nice and INTERESTING book.

Angela Jackson is a former psychology lecturer and teacher trainer. Her debut novel The Emergence of Judy Taylor won the Edinburgh International Book Festival’s First Book Award and was Waterstones’ Scottish Book of the Year.

The Darlings is her second novel.

Originally from the north of England, she now lives with her family in Edinburgh. 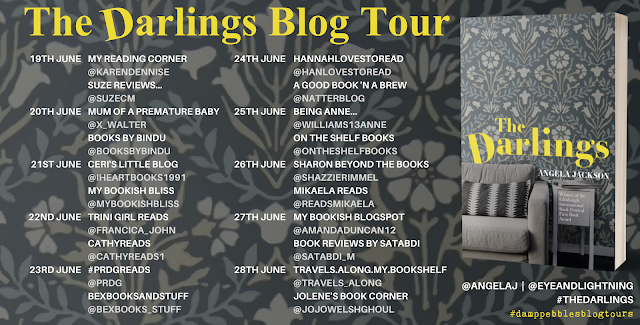 By Trini Girl Reads a la/s June 21, 2021
Email ThisBlogThis!Share to TwitterShare to FacebookShare to Pinterest

Trini Girl Reads
My name is Francica from Trinidad and Tobago. Welcome to my blog Trini Girl Reads. Here I am sharing my passion for reading with the world. You will see book reviews, book recommendations and a whole lot more.

Between the Pages Book Club

3 members
My name is Francica a.k.a. Trini Girl Reads. Welcome to my book club. This book club is designed for the diverse reader. I read everything from, psychological thrillers, YA, short stories, Romance, Historical Fiction. Activities to expect: ✔ BOTM picks ✔Book Recommendations ✔TBR Lists ✔Readathons ✔Buddy Reads ✔Challenges and so much more If these things interest you. Feel free to Join the Club


View this group on Goodreads »

Trini Girl Reads
My name is Francica from Trinidad and Tobago. Welcome to my blog Trini Girl Reads. Here I am sharing my passion for reading with the world. You will see book reviews, book recommendations and a whole lot more.